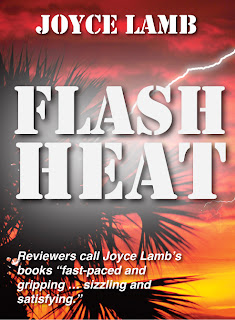 Flash Heat is available now as a $2.99 e-book on Kindle and Nook (other formats coming soon).

Here's what it's about:

Photographer Bailey Chase and reporter Cole Goodman only tolerate working with each other at a Southwest Florida newspaper. Cole knows Bailey's ex, and he's told Cole lots of lies about her. Not that Bailey cares. She's still healing from that disastrous relationship and has far more important issues on her plate: such as keeping her recovering drug addict brother on the right track as a single dad.

When Bailey gets slightly injured during a mugging while on assignment with Cole, she's shocked at how kind and warm and caring he is. And when it soon becomes clear that the mugging wasn't random, he reveals a protective streak that surprises them both.

Someone is after a photo in Bailey's possession, and he'll clearly stop at nothing to get it. Worse, it appears her brother's shady past is connected.

Cole and Bailey team up to crack this mystery before someone ends up dead. While they're at it, they let the sparks fly ...

Read an excerpt
Buy on Amazon
Buy on Nook
Posted by Joyce Lamb at 12:50 PM