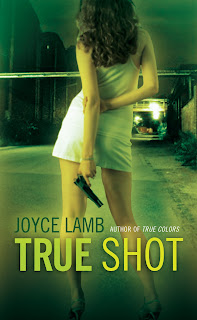 Sam closed her eyes and gritted her teeth against the throb of pain in her shoulder.

Focus, damn it. It’s what you’re good at. What you’re trained to do.

Soldier on. Accomplish the mission. Get to the cabin. Hunker down. Hide. Get warm. God, she couldn’t wait to get warm.

Blinking cold rain from her eyes, she squinted into the growing dusk, trying to get oriented. The cabin was around here somewhere. She was sure of it.

Unless she’d gotten herself lost.

No. She wasn’t lost. She knew where she was going.

Just like you knew where you were going when you ran away from home fourteen years ago?

She peered through the rain running in rivulets over her forehead and into her eyes. She couldn’t see a damn thing. Just towering trees decorated in gold and orange and red. The same coppery red that spattered her Nikes and the leaves squishing underfoot. Her feet were cold and wet, just like the rest of her. At least she still shivered, the body’s way of creating its own warmth. But, crap, she’d been shivering for so long and so hard that she should have generated enough heat to warm a small house. If she didn’t find the cabin soon, she was toast. And not the warm, golden brown kind.

She was probably toast anyway. No way was he going to let her go. He’d hunt her down like an animal. Have her shot down like they’d shot down Zoe—
She battled back the wave of grief that tried to steal her breath and forced herself forward, one foot after the other. Don’t think, don’t think.

But she couldn’t help but think.

Zoe was dead. Her closest friend.

Then she saw it. The Trudeau family cabin. Materializing out of a copse of amber gold and dark orange trees. An honest-to-God log cabin.

A rush of much-needed warmth spread through her blood. Almost home. As close to home as she’d gotten in a decade. Wouldn’t it be cool if her sisters and parents waited for her there? Alex and Charlie and Mom and Dad.

She pictured the cozy living room with its stone fireplace and polished wooden floor, the big, overstuffed couch with the red-and-black plaid blanket draped over the back. She imagined that blanket draped around her shoulders, imagined sinking into the poofy cushions and drifting off, wrapped in the familiarity of home away from home.

She found the key in its place, tucked into a cleverly carved notch three feet up from the planks of the porch. Her half-frozen fingers fumbled with it, missed getting it into the lock the first three tries. Hot tears streamed through the cold rain on her face.

Stupid, so stupid. Crying now, after everything that had happened, after so many years of not crying. N3 operatives didn’t cry. N3 operatives carried on.

Her hands trembled as she finally nailed the lock and heard the tumblers squeak open. The door swung inward, and she all but tripped over the raised threshold into dust-choked air and a musty odor that didn’t smell at all like the cabin she remembered. Where was the scent of fresh-chopped wood? The hint of fabric softener that spoke of clean sheets on big, soft beds?

She dropped her dripping bag on the floor and pushed the door closed, her arms and legs leaden now, weighed down by her sodden denim shirt and jeans. All she had to do was make it to the couch and get the blanket, and she’d be warm in no time.

But her knees buckled, and as they hit the floor, a fist of pain slammed through her shoulder. A burst of light flashed the world bright, and she flinched. A deep, quaking rumble vibrated the worn wooden floor under her knees. Thunder.

On the next burst of lightning, she noticed the pink water pooling near her left knee.

Oh, yeah. She’d been shot in the shoulder. Funny how she couldn’t feel it anymore.

In fact, she couldn’t feel much of anything. Maybe that should alarm her, but somehow it didn’t.

It figures, she thought. Make it almost home, and it wasn’t going to matter.

She was still going to die alone.

Buy on Amazon
Buy on BN.com
Posted by Joyce Lamb at 12:53 PM