Marie Force is one busy author

Hi! Marie Force, one of my favorite-of-all-time authors, has yet another e-book out! I can't keep up.

Today's release is book three in her Fatal series. Which is kinda appropriate to me, cuz if I keep missing all this sleep to read her books, it might kill me. Oh, OK, I'm being melodramatic. That's what I do. But enough about me. Here's the scoop on Fatal Consequences: 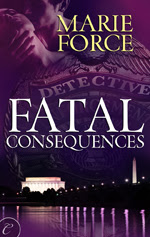 The murder of two members of the Capitol Cleaning Service might’ve been just another homicide investigation—that is If one of them hadn’t been romantically involved with a married senator from Arizona. Lt. Sam Holland and her team are plunged into another complex case that at first seems open and shut. But as Sam tugs on the threads of the investigation she uncovers a deep, dark Washington secret that threatens the careers of some of the government’s highest-ranking officials. Racing to catch a killer before he can strike again, Sam and her fiancé, U.S. Senator Nick Cappuano, attempt to plan a wedding while her colleague Detective Tommy “Gonzo” Gonzales faces life-changing news.

And you can find Marie online at http://www.mariesullivanforce.com

Now I'm off to get some of my own writing done now that Marie's productivity has shamed me into turning off the TV.
Posted by Joyce Lamb at 10:18 AM 1 comment:

What I did on my summer weekend

What do Avatar, Twelve Monkeys and Juno have in common? I’ll give you a minute …

Giving up already? OK, here goes: I lounged on my sofa on Saturday and watched all three movies back to back while I was being majorly lazy. Yeah, I know you had no hope of guessing, but it was fun to make you try. Don’t ask me why I picked those three – except that my DVR was telling me it had only 19% remaining capacity, and Avatar is a long-ass, capacity-hogging movie.

First, I watched Juno. I’m hanging my head in writerly shame for not having seen this movie way sooner. I mean, it came out in 2007. But now that I’ve seen it, I can say it was worth the wait. The dialogue and actors were amazing – and I loved that Juno’s stepmom was not a hateful bitch. How refreshing!

I also created a non-hateful-bitch stepmom for my heroine in Cold Midnight and was proud of myself for being super non-cliché. Juno writer Diablo Cody got there first (and won an Oscar), but I wasn’t far behind. I’m sure there are plenty of books and movies out there with rad stepmoms. I just don’t remember them. Wait. Rad? How old am I anyway?!?!

Next, I watched Twelve Monkeys from 1995. “Why?” you may ask. Three reasons: 1) Bruce Willis, 2) Brad Pitt and 3) A good friend told me it was pretty good. I remember catching glimpses of it a long time ago when my dad was watching it on DVD, but I didn’t pay much attention. It looked like One Flew Over the Cuckoo’s Nest meets Blade Runner. Not my idea of a good time then. But I’m older now (remember when I used the word “rad”?) and better able to appreciate movies about crazy people. See, Brucie’s a time traveler sent from the future to stop a virus from wiping out the human race. But when he arrives in the past, he ends up looking like, well, a nutjob. Brad Pitt is there, too, also looking like a nutjob. Amazing how well these two actors portrayed insane characters who weren’t actually insane. At least in Brucie’s case. Brad really was looney tunes – but in a good way. Brad just wanted to free the animals, not end the world as his co-characters assumed.

At any rate, I was entertained, if a little lost at times. And it turns out that what I perceived as a terrible, sad ending was actually quite hopeful. I didn’t figure this out until a friend explained it to me. I’m going to say I didn’t catch the hopeful note at the end cuz I was distracted by Brad’s freakishly rolling left eye. But it could just be that I have the attention span of a bored cat.

Last, I watched Avatar. At nearly three hours long, it freed up lots of space on my DVR when I deleted it. Bottom line: I liked it. I wasn’t crazy about it. I don’t want to watch it again. But I liked it. As everyone knows, the special effects are rad. I totally bought that the Na’vi people exist and that a paraplegic Marine could have his consciousness inserted into a Na’vi avatar so he could fall in love and save the world. Well, the world of Pandora, anyway.

Lots of cliches in this one. White guy puts it all on the line to save people of color. Dad’s not happy his daughter has fallen for the enemy. Misguided military guy blows shit up to gain control of lucrative resources. So while I was entertained, I felt as if I’d seen a lot of it before -- just not looking so damn cool.

It was derivative all over the place: Gee, there’s Romeo and Juliet. And Dances With Wolves. And The Wizard of Oz. Oh, look, it’s How to Train Your Dragon! And whenever Sigourney Weaver was on screen, I kept expecting an alien to come out of the ventilation system. I could already hear her screaming, “Get away from her, you bitch!” But, hey, that might have more to do with the fact that Avatar writer James Cameron also wrote Aliens, which I hadn't remembered until just now. Funny how the brain works.

So, did you watch any movies this weekend? Recommendations?
Posted by Joyce Lamb at 12:05 AM 2 comments: 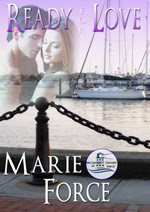 I've been waiting for this one! Ready for Love by Marie Force is finally available everywhere e-books are sold. Woo hooooooo!!! (And it's only $2.99.) Ready for Love is the third book in Marie's McCarthys of Gansett Island Series

This one sounds WAY darker than the others, with the heroine struggling to recover from losing her husband and kids. Yikes. That's got to be an emotional roller coaster -- and in the capable hands of Marie, I know it will be escapism at its best.

Here's a quickie description of Ready for Love:
For four of the best summers of his young life, Luke Harris was in love with Sydney Donovan, a wealthy seasonal visitor to Gansett Island. Then Sydney went off to college and never came back. She married another man and had two children while Luke remained on the island, working at McCarthy's Gansett Marina and wondering what had gone wrong between him and the only woman he ever loved. Fifteen months after Sydney suffers the tragic loss of her husband and children, she's returned to Gansett to figure out what's next, and that may very well be a rekindled love affair with the one man from her past she’s never forgotten. But is she ready for a second chance at love?

You can find Ready for Love at:
Amazon
Barnes & Noble
Kobo
iBooks
Smashwords
All Romance Ebooks

And you can find Marie online at http://www.mariesullivanforce.com/

Have you read any of Marie's books? I have a tough time putting them down. Which is not good when you need your beauty rest!
Posted by Joyce Lamb at 11:46 AM 227 comments:

Hi! True Vision has won some awards lately, so of course I have to share. I'm even going to do a bulleted list! Whee!!! 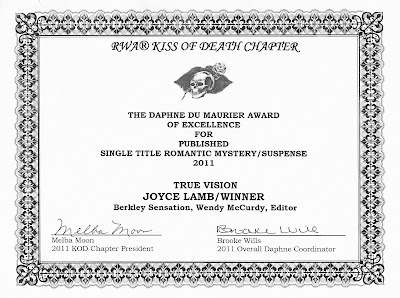