The true colors of Dexter

I've just finished watching the first season of Dexter. Holy cow, I was riveted. One of the things I love most about the show is the theme of nature vs. nurture. You know the theory, right? Some people believe that how a person is raised, or nurtured, determines who they become as an adult. Others believe a person becomes who they are because that's the way they were born -- that's their nature.
(If you haven't seen the first season of Dexter and plan to watch it, please be aware that there are MAJOR spoilers ahead. Turn back now!)
For the entire first season of Dexter, another serial killer plays a game with our hero. The so-called Ice Truck Killer taunts Dexter with clues about who he is (and about who Dexter is, though Dexter doesn't realize that). Dexter is fascinated by the Ice Truck Killer and enjoys the game. It's a puzzle for him to solve. There's an underlying theme about blood -- Dexter is a forensics specialist of some sort who works with blood and the Ice Truck Killer drains the blood of his victims. You find out the significance of that at the end of the season: The Ice Truck Killer is the brother Dexter hasn't seen, or remembered, since he was 3, when they witnessed their mother's horrific slaughter then spent three days trapped in a cargo container in her pool of blood. Hence, the focus on blood -- they're literally blood brothers.
What's so incredibly cool about the nature vs. nurture theme of this storyline is this: Yes, Dexter is a serial killer. But he kills only people who are also killers. He was raised by his adoptive father who recognized Dexter's "nature" and helped him to deal with it in a way that has both protected Dexter from discovery and forced him to have standards for who and why he kills. So Dexter's "nature" is to kill, but his father "nurtured" him to develop the way he kills.
Dexter's brother, Brian, on the other hand, had no such "father" to nurture him. His nature is to kill, like Dexter's, but Brian has become a serial killer with no qualms about killing innocent people -- probably like most serial killers. Because, you know, I know so many.
The game between Dexter and Brian reaches its climax when Brian kidnaps Dexter's half-sister (who Brian has also wooed into being his lover) and wants Dexter to help him kill her. Now, Dexter is a sociopath, so technically he's not supposed to feel any emotions. But he has to make a choice: kill his sister, who's kind of annoyed him lately with all her demands that he open up to her emotionally, or kill his newly discovered brother, who totally understands who Dexter is and why.
But Dexter can't bring himself to kill his half-sister, because, as he says, "I’m fond of her." Brian has no problem with killing her, even though he's developed their relationship all the way up to a marriage proposal. So while Dexter is technically a sociopath, he still feels affection for his sister -- because of his nurturing upbringing by his father. Brian had no such nurturing upbringing. So when Dexter makes the choice -- his sister, who doesn't have any idea who he really is, or his brother, the only person alive who does know who he is and understands him -- it's devastating. But nurture wins over nature.

Another reason this theme speaks to me is that I explore it in my new release, True Colors. In that, the villain, Butch Magee, is "trained" from a young age by another serial killer. Butch already had serial killer tendencies, what with dismembering small animals as a kid and such. So his "nature" is already established when the serial killer kidnaps him and starts the training. The heroine, Alex, has the psychic ability to "flash" back on another person's most traumatic episodes, which she experiences and feels as if they actually happened to her. When she gets kidnapped by Butch, she starts flashing on all the things that happened to him as he grew up with his kidnapper, the things that "trained" him to be a serial killer. When Alex escapes, she worries that she's somehow damaged, because she experienced the same things Butch did, and at a very accelerated pace. But the hero, Logan, points out that being a killer is not her nature and the way she was raised, or nurtured, will prevent her from losing her sense of right and wrong.
It was an interesting theme to explore, so I was especially thrilled when the same theme popped up in Dexter. Now if I could just get Showtime to make a series based on my True trilogy!
Posted by Joyce Lamb at 1:00 PM 3 comments:

I set my books to music

I love music. I mean, LOVE it. When I was in third grade, I played the violin. Apparently, I was pretty good at it, cuz after only a few months of getting lessons as part of a group, I started receiving them one-on-one from the violin teacher, Ms. Kuchenmeister. I swear I'm not making that up. That was her name. And she WAS kinda kooky. I mean that totally affectionately. 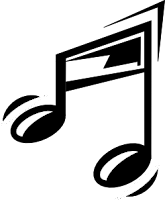 So anyway, after giving up the violin -- cuz, you know, I was expected to practice. Ew. -- I promptly fell in love with Tommy Roe's greatest hits album. It was Mom's before I claimed it. I would play that puppy over and over. (Fun fact: In True Vision, heroine Charlie sings my favorite Tommy Roe song, Sweet Pea, in her head to center herself when her psychic ability gets out of hand.) Next, I fell for David Cassidy and the Partridge Family, replaying the single I Think I Love You full blast on my Fisher-Price turntable until I'm sure my dad wanted to cram himself into a corner, cover his ears and just rock.
My love of music snowballed from there. I won't bore you with how many days' worth of music I have stored in my iTunes (29.9), but I will get to the point: Given my love of music, it's fitting that when I write a book, I usually pick a certain kind of music or even a particular artist to listen to while I write. My choice varies by book, and I think of the music I've chosen as the "soundtrack" of that book.
Some of my "soundtracks":
So … what about you? If you had to pick a soundtrack, say, for your life right now, what would it be?
Posted by Joyce Lamb at 2:48 PM 2 comments:

Another recommendation scores: How to Train Your Dragon

Over the holidays, I watched How to Train Your Dragon, another recommendation by a good friend. Man, my friends have good taste! 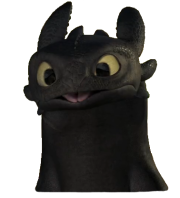 How to Train Your Dragon is an animated adventure starring Hiccup, who lives in a village of dragon-hating Vikings. His goal in life ... well, not his goal in life, but his family’s goal for his life, is for him to become a dragon slayer as fierce as his father. Thing is, while Hiccup desperately wants to slay dragons, to please his father and to fit in, he doesn’t really have the stomach for it. He’s more the cerebral type.

One night, he manages to take down the Holy Grail of dragons: a night fury. No one has ever seen a night fury up close, let alone brought one down. Hiccup is beside himself with excitement ... until he finds the incapacitated dragon and can’t bring himself to finish it off. Instead, he frees the dragon from its bonds. He returns the next day to see the dragon trying to fly, but it can’t, because his tail was injured when Hiccup captured him. Hiccup returns again, bearing food for the dragon. What follows is the development of an endearing friendship between Hiccup and the dragon, affectionately named Toothless. 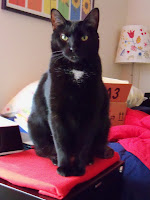 Toothless is so darn cute he reminds me of my equally cute cat, Allie. Naturally, I couldn’t get a pic of her making the face Toothless is making at above, but I swear on a stack of Fancy Feast that she’s made that exact same expression more than once. But I digress.

So, hey, what’s your favorite animated movie? I’m also partial to Up. I love the song that plays when the house first takes flight with all the balloons -- it’s good music to write to.
Posted by Joyce Lamb at 1:06 PM 2 comments:

I'm in love with a sociopath 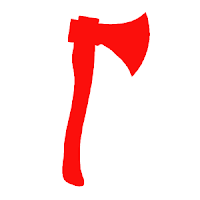 Let me say first: I love my Apple TV! Dexter streams so seamlessly through Netflix onto my high-def Vizio that I catch myself admiring the picture instead of paying attention to what I’m watching. It makes me so very happy.

On to Dexter: I’m only four or so episodes in, and my friends were right: I love it. Michael C. Hall, who I thought would in my mind forever be David Fisher of Six Feet Under, is a totally different person as Dexter Morgan. Which makes sense. I mean, the guy’s an actor, after all. But still. I loved Hall as David Fisher. He was the kind, thoughtful brother who balanced the whiny, narcissistic Nate, played by Peter Krause. It still irks me that Six Feet Under killed off David’s gorgeous partner, Keith, in the series finale. And no matter how many times I watch Brothers & Sisters, Rachel Griffiths will always be the self-destructive Brenda to me. The day Sarah Walker has sex with a stranger in a department store, I won’t be surprised. But I digress. Happens.

Back to Dexter: The storytelling in this show is rich with details. Only four eps in, and I already know how Dexter became a serial killer and how long he’s struggled to hide the fact that he’s a sociopath. It’s interesting, to me anyway, that all the things he does to “pretend” he’s normal are the things that endear him to me. He says and does the right things to put his emotionally damaged girlfriend at ease. He dotes on her kids. He looks out for his sister. And he’s helping the police track another serial killer. It’s a game to him, but he’s still helping.

What I love most about Dexter: The people he tortures and kills are bad, bad people. The innocent appear to be safe with him. In one of the early eps, for instance, his girlfriend, Rita, has a problem with her super bitchy neighbor, who’s not taking very good care of the dog her ex left behind. She’s not starving it or anything. She just leaves it in the back yard, where it cries and whines a lot. Dexter tries to get the neighbor to take the dog inside, because the crying is upsetting Rita’s kids and interrupting their sleep. The cranky neighbor blows him off. She also blows off Rita, leveling a cruel jab or two at her, too. As I was watching, I kept thinking, “Dexter needs to kill that bitch.” And I kinda worried about what might happen to the dog. But Dexter does nothing to either one -- because even though the neighbor is a cold-hearted witch, she’s innocent. Turns out, I was the one who wanted her dead, not Dexter. And I’m not a sociopath. (I swear!)

I’m looking forward to how this series plays out. I expect good things. And I expect Dexter will keep playing with my morals and emotions. Sounds good to me!


Anybody else watching Dexter? Or maybe you discovered a great TV show or movie that you at first thought wouldn't appeal to you?
Posted by Joyce Lamb at 2:05 PM 8 comments: